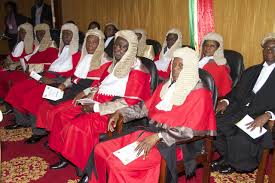 The Acting Director in charge of the Public Complaints Unit of the Judicial Service stated that the 2015 Ghana judiciary scandal severely damaged Ghana’s judiciary system.

Speaking at the Super Morning Show of Joy FM, court Judge, Justice Angelina Mornah Domakyaareh, said that measures were put in place to address corruption, but there is still a lot of work to be done.

“On 23 September 2015 Anas premiered, in four showings, in front of a record-breaking audience of more than 6500 people at the Accra International Conference Center,[7] his undercover film “Ghana In The Eyes Of God”. It exposed widespread corruption within the judiciary and graphically showed court workers like clerks and bailiffs connive with a number of respected judges to influence court cases through bribes. 34 judges and magistrates were caught on a hidden camera receiving enticements of money, goats[8], sheep and even foodstuff. As a result, presumed robbers, murderers, drug traffickers, rapists and litigants in land cases went free”

“In reality, the Anas’ incidence is known all over the world, and it badly dented the judiciary’s reputation,” Justice Domakyaareh revealed

She was quick to point out that there are a lot of good judges in the country’s judiciary system, “but where there’s a nice nut among the bad ones, it has the bad nut that spoils all the nuts.”

To ensure that the reputation of an individual being appointed to the bench remains impeccable, the Judicial service also publishes in the dailies the name of the shortlisted candidate to invite feedback from the public about their conduct.

Listen to the full interview here