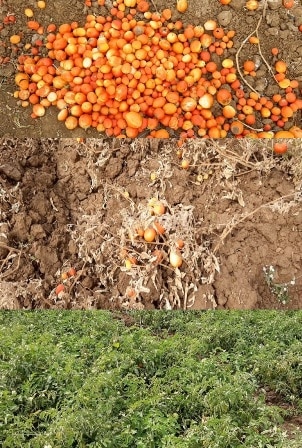 Teshie (UE) Jan. 20, GNA – About 30 hectares of Tomato gardens in parts of the Bawku West District in the Upper East Region, have been destroyed by the bacteria disease,‘Ralstonia Solanacearum’.

The disease, was identified by the Savannah Agricultural Research Institute (SARI) at Manga in the Bawku Municipality causes wilting within a short time of infection and destroyed only tomato farms at Teshie, Zebilla and other vegetable farming communities in district.

Farmers at the Teshie and Soogo valleys spoke to the Ghana News Agency (GNA) at Teshie and complained about the difficulty in accessing certified seed varieties, forcing them to use the old varieties that were susceptible to diseases.

Mr Alaldago Ayadago, a physically challenged farmer told the GNA that, the disease which appeared strange to them, destroyed all the tomato crops on his farm, taking away his livelihood and putting him in debt.

“For the past 15 years that I have been farming, I have never experienced such a strange disease in this area, it spreads very fast and destroyed my farm within a day, I noticed some signs of wilting one day and the following morning all the crops had dried up”, he said.

Mr Ayadago appealed to the Ministry of Food and Agriculture (MOFA) to help the affected farmers.

Mr Elias Atimberi, the District Director of MOFA, confirmed the destruction of the gardens in an interview with the GNA at Zebilla and said farmers in the Teshie community which was most affected, were advised to stop cultivating tomatoes for sometime and diversify or practise crop rotation, while a treatment regimen was used to treat the bacteria, to avoid frequent attacks.

He explained that it was not a strange disease and could be controlled by crop rotation as the bacteria might die off or lose its potency if it did not get the tomato plant to infect after a few years.

Mr Atimberi urged farmers to adopt the cultivation of certified and improved seeds that could withstand diseases and harsh weather conditions, to avoid the reoccurrence of crop loss.

Other districts near the Bawku West district have not registered any kind of crop infection so far.

Mr Joseph Walier Beni, the Binduri District Director of Agriculture told the GNA that his district had so far not recorded such cases, but the Directorate was working closely with farmers and sensitised them on the various diseases of vegetables and the need to report any incidence of abnormality on their farms.

Statistics indicated that Ghana spent so much money to import tomato paste annually due partly to unavailability of improved seeds for commercial cultivation of tomatoes, he said and urged stakeholders to address the issue by making certified and improved seeds of vegetables available to farmers.

ECOWAS urged to step up fight against trans-border crimes