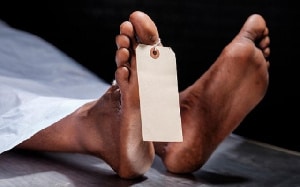 On Thursday, 12th November evening Ophelia Baah was taken to the Effia Nkwanta Regional Hospital because of diabetic complications, and upon arrival, the medical officer on duty said that she already dead. Her body was taken to the hospital’s morgue. The family and relatives are still in great shock after the mother four rose from death barely twelve hours after being taken to the mortuary.

Speaking during an interview Robert Donkoh, who is Ophelia’s husband said that the family left the hospital weeping and wailing after receiving the bad news. He said that they were still mourning until on Friday morning when they visited the morgue to ensure her wife was embalmed “When we got to the mortuary around 6 am, we were told my wife had been sent to the casualty because she has come back to life.”

According to Robert Donkoh, the Mortuary attendant on duty was going to prepare some bodies for embalmment only to realize that Ophelia was sitting and that she was still alive. The hospital brought a stretcher to take her back to the hospital ward.

Despite that, the news shocked the family they have also filled them with joy. The family quickly went to the Hospital ward, to confirm the news and for sure, Ophelia had been put on oxygen. The mother of four is currently being treated and has been battling diabetes for some time.