Home Travel A Trip to the Amazing Ada Island
Travel

A Trip to the Amazing Ada Island 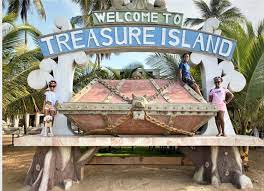 Ada Island is a fantastic weekend getaway spot with amazing tourist attraction sites. One of the leading travel agencies in Ghana is organizing a weekend getaway to this point; therefore, you can book if you want to make memories this weekend.

Some of the scenic sites that attract many tourists to this region are the interception of the volta lake and the Atlantic Ocean, Nkyinkyim museum, crocodile island, Rhum island, Ada Estuary, and many others. Besides, you can participate in interesting activities like boat cruises, beach games, board games, and bonfire parties.

Ada island is a wildlife paradise with birds, crocodiles, monkeys, and marine turtles. The places that you can explore include;

The Estuary is a significant ecosystem in this area. Some of its salty areas feature mangrove vegetation. Ada Estuary provides the best conditions for water sports such as fishing, water skiing, canoeing, jet-skiing, wakeboarding, and sailing.

The waters of the sea and the river meet at this estuary. Touring this island gives you a chance to see the different colored waters swaying to create big waves. The natural force of the sea waves towards the Northeast impacts the original estuary moving across the Volta River towards the other side. Light materials are carried with the waves and dumped at the estuary.

Initially, the estuary was revived by a strong current during the rainy season, but after the construction of huge hydroelectric power dams in Akosombo and Kpong, the water coming through is no longer strong revive the estuary. This issue results from the reduction of seawater in the volta river.

Shrines are very common in Ghana. The two major shrines in famous Ada were closely linked to girl child slavery. According to the traditional beliefs of this country, a crime is compensated for when a girl of the offender’s family goes to a shrine to serve the gods. This system was eradicated in the 19th century, but some communities still hold to it.

There are various fishing villages around Ada Island. Fishing is among the main occupations in this area. It is an interesting activity that you can participate in during your tour. Making a traditional fishing boat demands so much effort. Its lower part is made of one big piece of wood, while the upper part is of timbers. The boats are painted in various colors.

Old trading Fort at the seaside

The name Ada Foah originated from Ada fort. The sea moves closer yearly by over 1.5 meters, and the water is slowly washing the building that served as a prison in ancient times. There is an upcoming building of the sea defense wall to stop the gradual impact of the water.

The ostrich farm is situated near the border of the Dangme East District. The farm has a good number of ostriches whose meat is supplied to restaurants. You can walk along with the enclosures and explore the giant eggs during the visit. It is not easy to get there, and there is no recognized tour because security guards and taxi drivers can give you the information related to this farm.

The monkey island is situated in the Volta River. The monkeys can only be seen in the early hours. They stay away from the villages during the day, but as late as 6.30 a.m, you can see them from one of the watchtowers.

The most prominent Reality Shows in the Last Two Decades

Why you should consider Ghana for a Summer...

A Tourists’ guide to All Ghanaian Dishes