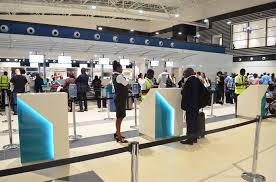 The Ghana Airport Company Limited (GACL) staff has today gone on an indefinite strike citing mismanagement by the company’s Managing Director, Yaw Kwakwa as the root cause of the withdrawal of their services. The GACL workers have announced that effective from Friday, the 26th of February they have withdrawn customers’ services and other essential services at the various airports up to until when the Managing Director is removed from office.

Speaking during a radio interview, the Chairman of the Airport Workers Union, Abdul Issakah Bamba, has revealed that their indefinite strike has led to the immediate withdrawal of services for both the local and international flights. Bamba further unveiled that they had locked down the MD’s office among other offices on the grounds that he (the MD) was the cause of GACL’s downfall.

“How the MD is managing the company . . He is killing the company slowly. Until this is resolved, we will not go back… We have locked the offices of the MD and others and our services on both local and international flights have been withdrawn and what will solve the problem is for the MD to leave office now.” The Chairman of the Airport Workers Union said.

The Government is doing whatever it takes to Avoid Middlemen in the Procurement of the Corona Virus Vaccines, Says Dr. Nsiah-Asare