Akuapem Poloo’s Mother cries during an interview, Requests Judge to free her daughter. 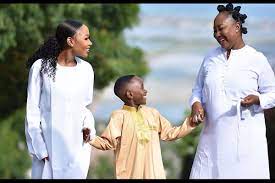 The mother of the convicted video vixen, Akuapem Poloo, has begged the judge to free her daughter. While Speaking during an interview on Thursday she said, “I am on my knees, pleading with the judge in the name of God, bearing in mind too that my daughter has already admitted her wrongs and pleaded with you, please forgive her,” Akuapem’s mother stated.

“She should consider the little boy-my daughter’s son, and let this matter go away and God will bless her. I am an ulcer patient but as I speak to you now, I have not even been able to eat since morning and I have a bad headache from crying so much. I plead with her,” she said.

According to Akuapem Poloo’s Mother, her grandson refused to go to school on Thursday following her mother’s arrest. “He hasn’t taken the news easily at all since he saw it yesterday. They are writing examinations at school but this morning, he refused to go and when I asked him, he said he wants to avoid responding to questions from his friends on what happened. This has not been easy on any of us,” she narrated.

A large number of Ghanaians are also pleading with the Accra Circuit Court to let the actress free. Besides, Various celebrities have started a campaign (#FreeAkuapemPoloo) to persuade the court to free Akuapem.

The actress will remain in jail for ninety days. The judge handling her case revealed that she sentenced her for ninety days after considering her pleas.

Fabio Gama has been suspended from the premier League.