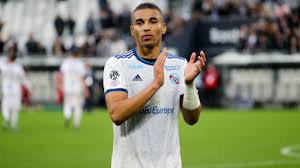 Defender Alexander Djiku who was born in France has joined the Black-Stars camp in Turkey before the international friendlies against Mali and Qatar.

This is the first time after getting his first international invite from the African country for the Strasbourg centre to join the team.

After talks with Ghana coach C.K Akonnor, Djiku, who was born in Montpellier-France, choose to represent the West Africans at the international level.

Alexander Djiku joins the rest of the Ghana team after shaking off an injury which almost ruled him out of the games.

On Sunday he played for Strasbourg and lasted seventy-one minutes and left immediately for camp.

On Friday, 9 October 2020, the 26-year-old could make his debut when they face Mali or 3 days later against the 2020 FIFA World Cup hosts Qatar.

Alexander’s arrival has increased the number of players in camp to19.

The players in camp include: