Home Sports Amateur Boxing President has said that Takyi is not yet a professional boxer.
Sports

Amateur Boxing President has said that Takyi is not yet a professional boxer. 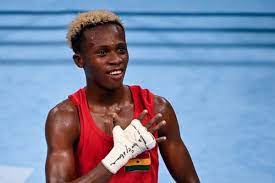 George Lamptey, the Ghana Amateur Boxing Authority president, has discredited claims that Samuel Takyi will be promoted from an amateur to a professional boxer. During an interview, the Olympics Bronze medalist said that he was promoted to the next boxing level.

The president of the Ghana Amateur Boxing Authority said that Samuel Takyi did not understand the question and, therefore he ended up giving the wrong answer. According to George Lamptey, the Olympics Bronze medalist is not yet ready to fight as a professional.

“No, he’s not turning professional as at now it was a question, they asked him, and he didn’t think of it very well, but I’ve spoken to him, and he had no idea so that interview can be discarded. He’s focusing on his amateur career; I’ve spoken to his management, and they were also surprised, and so in a nutshell, he has shelved that decision and focusing on his next step.”
“We will need to consult his management as well as professional boxers like former world champion Azumah Nelson before we conclude so that we don’t jeopardize his boxing career after he has lifted the flag of Ghana,” Lamptey noted.

The Government is planning to withdraw US$1 billion in SDR allocation to fund the Economy.

Ghanaians in Germany have requested Akufo-Addo to fix the Country.