Anin Yeboah sworn in as 14th Chief Justice of Ghana 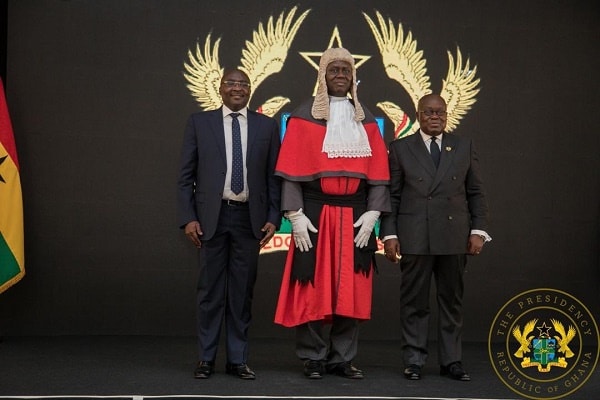 The 56-year-old got his wish of filling in the vacant Ghana Chief Justice position when he took oath on Tuesday.

President Nana Addo Dankwa Akufo-Addo sworn him into office on Jan 7th, 2020, marking the beginning of a new era in the history of the Judiciary.

Addressing the ceremony of the Chief Justice of the Republic at the Jubilee House, after administering the Oath of Allegiance, the Judicial Oath and the Oath of Secrecy, President Akufo-Addo stated-

“I am hopeful that this same level of support will be forthcoming as he assumes the mantle of the Head of the Judiciary. To his colleagues on the bench and members of the Bar, I urge your continued solidarity and corporation with the new Chief Justice to promote the rule of law. That will be in line with the finest traditions of the Bench and the Bar and will help enhance the welfare of our people” President Akufo-Addo stated.

On his expectations of the new Chief Justice as he begins his new role as head of the country’s Judiciary, President Akufo-Addo said he expects “decency, discipline, fairness, hard work, deep-seated respect for the rule of law and the continuing modernization of Judicial activities to be the hallmarks of his era as Chief Justice”.

Dr. Ibrahim Anyars named one of the top CEOs in Ghana