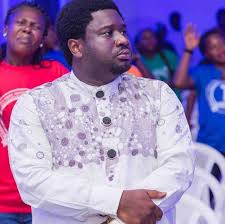 Speaking during an interview with Rev Nyansa Boakwa he stated, “I don’t serve an idol, I serve God through Ajagurajah because Ajagurajah is not God.” Answering why he calls his place of worship a shrine instead of a Church he said “the place is Holy and I offer blood sacrifices to God and the only place this can be done is on Holy grounds”.

Compared to other many pastors and churches, Bishop Kwabena said that he doesn’t collect offerings and still lacks nothing because Ajagurajah caters to all his needs. “And that is why most people refer to me as a ritualist”. He claimed that was not saying this to boast and said, “Ajagurajah has blessed me so much that everyone close to me enjoys this blessing.

“I won’t ask you for money but if you make a pledge to God and you decide to redeem it or if you want to show gratitude to Ajagurajah for something he’s done and you gift me money, I’ll share the money to those around after redeeming your pledge.”