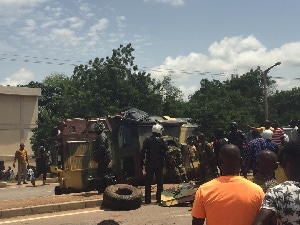 October the 8th, Dominic Nitiwul, the Minister for Defense paid a visit to the soldiers who were injured in a crash that involving an armored military vehicle. According to a source close to the presidency, Hon Dominic Nitiwul was directed by the president to ensure that the best medical care was administered to the casualties. The source further revealed that the accident emergency at Bolgatanga forced the defense minister to leave in the middle of a public event which was happening in Kassena Nankana West District where the president was present.

“The President directed the Defense Minister to cut short official activities with the team and dash to Bolgatanga to take care of the injured soldiers. He specifically told him that the welfare of the injured was as important as the official tour which is why he has to leave”, revealed the source.

It’s reported that the “Mowag”, the armored vehicle, had a head-on collision with a light arms police vehicle on the Bolgatanga-Navrongo highway whereby the Mowag rolled several times causing injuries to the soldiers in there. The injured were rushed to the Bolgatanga Hospital where they are reported to be responding positively to treatment.