Home Business COPEC Has Requested the Government to Automate collection of Revenue at the Tollbooths.
Business 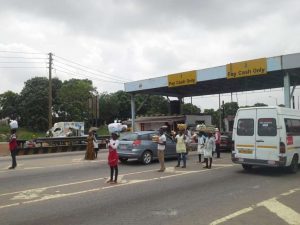 The Chamber of Petroleum Consumers has requested the government to instantly move from manual to electronic toll collections. According to COPEC automation will lower traffic and ensure guaranteed revenue. Besides, the system will stop the robbery cases which occur occasionally, lower the pressure at the tollbooth and prevent travelers from inhaling carbon emissions.

The Executive Secretary at the Chamber of Petroleum Consumers Ghana said, “With the electronic system, we are proposing that an estimated amount is given to vehicle owners as part of their roadworthiness. That is a better way than a drive stopping at the booth removing money and waiting for change, which wastes so much time.”

“By doing this the Driver and the Vehicle Licensing Authority will account the proceeds to the government instead of the current system where the government will not have to wait for sales from the toll operators. No one can steal from the toll funds again and the government will get the money it needs,” he stated. According to the Executive Secretary, they have already submitted the proposal to the Transport and the Finance Ministries. One manual booth will be left for those who are not willing to pay upfront.

Kweku Frimpong recounts how he acquired possessions for his family after selling coconut for 29 years.