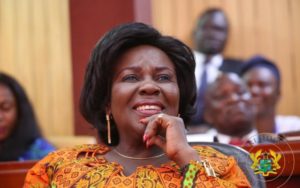 The FDA internal memo read, “Management would like to inform staff that effective 18th May 2021, Mrs. Cynthia Daapah Ntow, Head of Legal, will cease to be a staff of the FDA. The decision has been arrived after Mrs. Cynthia was taken through the internal disciplinary process of the Authority, following a charge of misconduct levelled against her.”

“The Disciplinary Committee recommended to the Board that the appointment of Mrs. Cynthia Dapaah-Ntow is terminated. The Board has subsequently accepted the recommendation and given her the required notice of termination of appointment. The Staff are also hereby informed that the investigative Committee exonerated the CEO of all allegation of wrongdoing on her part.”

“The management appreciates the patience exhibited by all the staff while the disciplinary process lasted. As a matured regulatory agency whose core values include transparency, fairness, and integrity, the Authority reiterates its zero-tolerance for bribery and corruption and reaffirms its commitment to the staff.”

Agradaa Proves her seriousness after burning her gods.

Sponsor my wedding and I will settle down-Zionfelix