Did President Akufo-Addo fall asleep at the Russia African Summit? 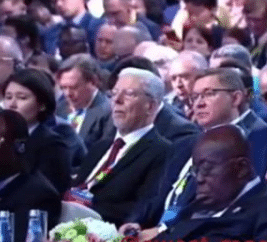 A video of President Akufo- Addo is trending nationwide where Akufo-Addo is seen with head down during one of the presentations. In the clip you see The President of Gambia, sitting to his left, and many others with their heads raised listening to the speaker. He has given the impression that he was either dozing off or was not engaged in the topic of discussion.

Watch the video and make your own conclusions.

The Russia–Africa Summit commenced on Oct 23, 2019. A two day event being held at the Sirius Park of Science and Art  and will be co-chaired by Russian President Vladimir Putin and Egyptian President and African Union Chairman Abdelfattah ALSISI. Russia–Africa Summit is the first event of its kind in the history of Russian-African relations to which the head of every African state and the leaders of major regional associations and organizations have been invited.

Many are accusing the Ghanaian President of such act while others think that he was in full control as they watched a second clip of the summit. Where President Okufu-Addo is seen to make a slight head movement.

President Akufo-Addo will be holding meetings with the President of the Russian Federation, Vladimir Putin, and CEOs of some Russian enterprises to discuss bilateral relations.

“We hope that this new era of Ghana-Russia, and Africa-Russia relations will reaffirm the principles of solidarity, mutual trust and respect, and which will assist us deliver peace, security, development, progress and prosperity for our peoples.” #RussiaAfrica #Sochi2019