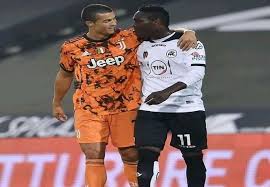 Emmanuel Gyasi has spoken about meeting Cristiano Ronaldo. For the first time, the 26-year-old Ghana forward played on the same field with Cristiano in his side 4-1 home defeat to Juventus in the Series A.

Emmanuel who spoke with Cristiano after the game said what he told him. “After the game, I had a little chat with Cristiano Ronaldo before leaving the field. I told Ronaldo that he is an inspiration to me and almost all footballers’ especially young ones.” “It was exciting, we entered together from the bench, and warming up next to him was wonderful. You have to watch it and learn if you want to grow professionally.”

Furthermore, He spoke on how he scored his first goal against Cagliari in the continuing campaigns, “That goal is the culmination of many sacrifices I’ve made so far but I don’t feel satisfied, I hope it’s just the beginning.”

He also said that running away from the relegation will look like winning the league in case Spezia maintain their status in the League. “Finally, what are the objectives? First of all, the salvation of La Spezia. It would be like winning the Scudetto. I try to improve myself every day to repay the trust of the company. And go back to Taurus? Never say never, but now I’, happy here.”