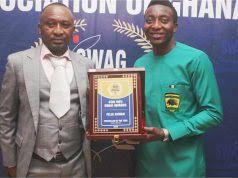 Following his exceptional performance in the year 2019, the Porcupine Warriors captain and the Asante Kotoko goalkeeper, Felix Annan, has scooped the Footballer of the Year title in the 45th Sports Writers Association of Ghana awards (SWAG).

Annan won the Footballer of Year title after shrugging off Ashanti Gold former striker, Shafiu Mumuni, and former forward of Hearts of Oak, Joseph Esso, both of whom posed stiff competition to him in the 45th SWAG Awards race. The 45th SWAG Awards Footballer of the Year has played a vital role for his club all through the 2019 CAF inter-club competitions, a move that saw him get the Black Stars call-up in the same year.

Besides, it’s reported that Felix Annan has assented to extend his contract for three more years with the Porcupine Warriors effective from 2019 up to until 2023.