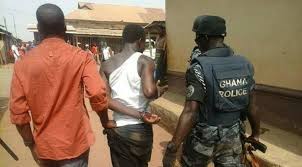 Following the arrest of eleven members of the National Democratic Congress (NDC) by the police anti-armed robbery unit based in Kumasi, fierce gunshots were witnessed at Asawase. According to the Asawase constituency Director of Communication Yakubu Tony Aidoo, the arrest of the eleven NDC members took place at about 9.15 pm when the “suspects” had gathered near the Asawase Member of Parliament’s office.

Aidoo further disclosed that the armed police just stormed in, and cuffed the eleven before taking them to Asokwa and Suame police stations in Kumasi Central. Aidoo’s sentiments on the arrest of the eleven NDC members were backed up by the Asawase Constituency NDC deputy secretary, Marwan Abdul Wahab, who revealed that eleven were arrested without a reason. Mr.Wahab further reported that when the eleven inquired to know the reason behind their arrest, the police simply said that the arrest was based on ‘orders from above’.

“We believe President Akufo-Addo and NPP are doing everything possible to intimidate NDC members in Asawase Constituency and also frustrate our campaigns aimed at retaining the seat. We will not allow ourselves to be intimidated. The arrest is a wake-up call and we will know how to position ourselves,” revealed Marwan. “We are calling the Ashanti Police Command to tell us the reason why they arrested our party members. We insist the arrest is baseless because the police cannot give the reason why they arrested them,” he emphasized.

Meanwhile, the police have remained mum while the eleven arrested NDC party members remain in custody.