Home Sports Former Udinese Midfielder is looking forward to being a coach.
Sports

Former Udinese Midfielder is looking forward to being a coach. 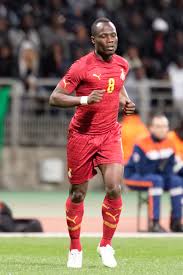 Emmanuel Agyemang-Badu of Udinese has disclosed that he is planning to be a coach after his retirement from football. While speaking during an interview, the midfielder said, “Coaching is an option but I would love to be a scout for a club. If I can be a scout for Udinese in Africa it will be very wonderful.”

He is not playing for any club, and therefore Emmanuel is looking forward to joining a new club. A few days ago, Emmanuel Agyemang-Badu, made an announcement about his retirement from international football with Ghana.

Besides, the midfielder also noted that “I have a good relationship with Udinese so I can speak to them and see how it goes. I know a lot of coaches in a lot of clubs. Coaching is my second option. I am not ready to be a CEO of a club because I don’t have experience at that level.”

Emmanuel terminated his contract with Verona club last year, whereby he made ten appearances for the club in series A. His health and fitness negatively affected his performance for this club. “Right now, I am no more with Hellas Verona. I cordially agreed to terminate my contract and so I’m a free agent to join any club. After all the Covid stuff, I decided to come home and rest small and find a team in January.”

He further revealed his disappointments as a player, “My lowest point and biggest disappointment so far was not winning the Africa Cup of Nations. Another of my biggest disappointments was when Udinese lost a penalty shoot-out to Braga because we lost out on qualifying for the Uefa Champions League. But in terms of my career with the Black stars, it has to do with not winning the Nation Cup. The most painful was the defeat to the Ivory Coast because we took a 2-goal lead and still lost but as for the defeat to Egypt in 2010, it’s not regrettable.”

Ras Mubarak says that it’s illegal to summon MPs without the Speaker’s permission.