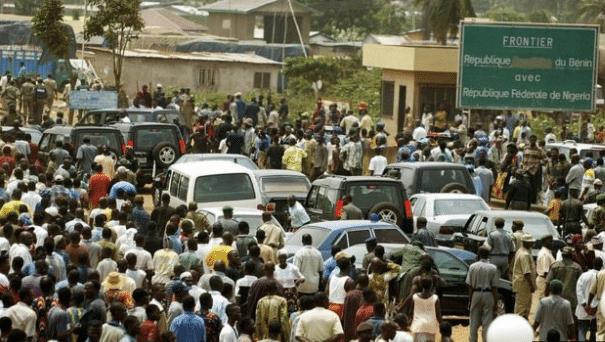 Traders in Ghana are disappointed over the failure of the Economic Community of West African States (ECOWAS) to stop Nigeria from closing its borders. They were dismayed at inaction by ECOWAS, which has not even issued any statement against such a move by Nigeria.

Nigeria closed its border with Benin last week following a bitter trade dispute between the two countries. The official reason behind the border closure was the move to stop the smuggling of 45 items into Nigeria from other ECOWAS members. However, the smuggling increased after Lagos banned the import of 40 items from soap to cement to stop the depletion of its foreign reserves.

ECOWAS came into existence in 1975 and its stated objective was economic integration across West Africa. Nigeria, Ghana, Benin, and 12 other countries are part of it. Nigeria alleges that other member states have failed to rein in the smuggling of rice and other goods into the country impacting the local industries there.

Ghana shares no boundary with Nigeria. However, as being a member of ECOWAS, the country gains immensely from the free movement of goods and services between the country and Africa’s biggest economy through Togo and Benin. Hence, the closure had a ripple effect in Ghana, where factories and traders are finding it difficult to source key raw materials and send products to Nigeria and other central African countries. This has resulted in rising manufacturing costs. As traders are using use alternative routes for exports, it is adding to the cost and time making their products unviable in other markets.

The Ghana Union of Traders Association  (GUTA) has been vocal in criticizing ECOWAS for unable to lift the blockade. It claimed that there was no attempt made by the organization to dissuade Nigeria from closing its border or to reopen it. Though Nigeria is a signatory to free movement of goods and services enshrined in the ECOWAS charter, the organization failed to take any action against it.

GUTA alleged that the inability of ECOWAS to intervene and act against Nigeria over the border issue was making the regional body ineffective. The traders’ body was also highly critical of “unfairness and lack of equity” practiced by ECOWAS when Ghana makes any such decision to protect its national interest.

“It was observed that whenever Ghana decides to enforce its laws, ECOWAS Commission steps in to put pressure in the name of sub-regional integration whiles they [ECOWAS] look on for Nigeria to have her own way anytime it suits her,” the statement said.

Ghana, according to GUTA’s office bearers, too battles the smuggling menace. The large-scale smuggling through its border with Togo has long been an issue severely impacting the country’s revenue collection apart from allowing substandard and dangerous goods to enter the country. Though there has been a demand to close the eastern border, Ghana was unable to act following resistance from ECOWAS.

GUTA has appealed to Ghana’s government to “strictly enforce” its laws and protect its interest “within the context of the ECOWAS protocol.”

About 80% of goods in West Africa are transported through roads. Nigeria sits on the key route connecting West Africa with other parts. Its border closure has been seriously preventing the free movement of goods and services to and from Ghana and other countries to the West.

What You Should Know About the Legendary Yvonne Nelson