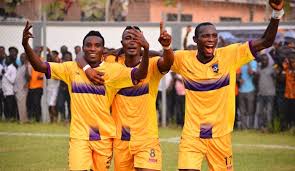 While addressing reporters at a ceremony made to announce Gold Fields’ deal to sponsor Medeama Sporting club, Alfred Baku, Head of Gold Fields West Africa and the Executive Vice President, has revealed that placing Medeama at the global football standards is their immediate commitment. Baku further revealed that the Tarkwa-based is the one at the heart of Gold Fields’ sponsorship plan and not the Black Stars.

Gold Field’s which is remembered for being the Black Stars’ headline sponsors in the 2000s, didn’t show any signs of sponsoring the club in their press briefing. It’s alleged that the Gold Fields-Black Stars union came to an alt when Gold Fields failed to renew their five-year sponsorship with the club back in 2011.

“We supported with $15million for the five years we were with them. The investment helped because it qualified them for the World Cup for the first time and four years later, they also qualified for the one in South Africa. When we were with them, we knew other companies were knocking on the doors of the GFA so after five years we decided to allow other companies to take over. It is not in our current plans to sponsor the Black Stars. We want to focus on Medeama and colts clubs within our catchment area. We believe that is how we can help unearth football talents.” Baku Clarified.

The $300,000 Gold Field’s deal to sponsor Medeama Sporting club is in the next football season expected to cater to the players and managers’ salaries, accommodation, medication, feeding, and the Yellow and Mauves logistics.