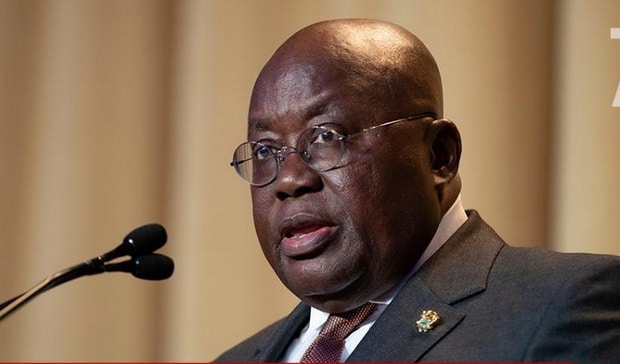 President Akufo-Addo has said that he will keep knocking the door until the Volta region and NPP are married. The president said this on Tuesday, September 1, 2020, when he addressed some locals in Amedzofe in the Volta region.
Presently he is on a visit to the area, where he commissioned the Five Piped Water Supply System in the Amedzofe society.

President Akufo-Addo said he wanted to “keep knocking on the door until the door is opened to me until the Volta Region and the NPP are married.”

The President insisted that he has people from each tribe serving in vital roles of his government, therefore dismissing claims that he is a tribalist. He, therefore, requested Ghanaians to ignore every person who promotes tribal divisions and sentiments.

“No one who is committed to the Ghana Project, as I am, can have an ethnic agenda. Rather, we should shun all those who would promote ethnic sentiments and divisions amongst us for selfish, partisan, political ends. There are people from this region, some of whom are well known to you here in Amedzofe, who serve in sensitive parts of my government and influence decisions daily. I may have my failings as we all do, but being a tribalist is not one of them.” He said

He proceeded to clarify the distribution of military personnel to various border towns in Ghana.

The President Akufo-Addo firmly disproved claims that the Volta community was being targeted, saying the soldiers are only there to protect against “potential terrorist attacks on our shores and to prevent the importation of the virus into our country.”

The Volta region is highly regarded as the opposition’s stronghold. NDC got a lot of votes from the area in the last general elections. With elections coming up Akufo-Addo wants to ensure that he gets as many votes as possible from the area.

Professor J.K Mintah says he is qualified to be GFA Technical Director