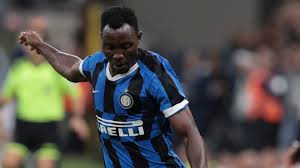 Kwadwo Asamoah has disclosed what made him leave the Inter Milam, October this year. The Black stars Midfielder had an agreement with the club to end his contract on the last day of the summer transfer window. His contract was scheduled to end in June 2021.

“At the beginning of my third season at Inter, I saw that things were getting worse and worse and the best thing to do was to focus on how to continue my career. I was still tied to the Nerazzurri by a contract, but I wanted to be right with the club. Everyone at the Inter has always treated me well, the club, my teammates have always supported me,” Kwadwo Asamoah stated.

Furthermore, Asomoah said, “They knew that I would always give my best and that I was trained hard, so when I explained my situation to them, they understood me right away. We made a deal and they let me go without a problem. Italy is my second home when I think about my career, I can only think of Serie A.”

During the summer transfer window, Asamoah was about to join Sampdoria nevertheless, the deal failed during the last minute. Kwadwo Asamoah is being associated with moves to the MLS, with clubs in the series A requesting him to play for them.

Kwame Okyere said that Jean Mensa is not smart enough to steal.