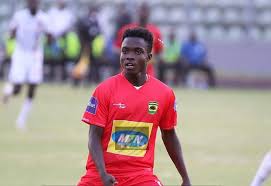 Matthew Cudjoe was left, out of the new strikers unveiled by Legon Cities before the start of the 2020/21 Ghana Premier League. He was signed by the club as part of Asamoah Gyan’s deal.

The Royals exposed twelve new strikers with Ghana’s always leading top scorer Asamoah Gyan leading the charge. During the unveiling of the new strikers, Matthew Anim-Cudjoe was absent because he was handling national team assignment.

During an interview, Samuel Anim-Addo, Matthew’s manager confirmed that he will be unveiled by the club at a later date. “They are going to unveil him soon”. When the season commences, the Royals league campaign against Berekum Chelsea will begin.

No woman should expose her nakedness on social media – Tina Muulikaa