Home Culture Popular Monuments in Ghana that You Should Visit
CultureLifestyleUncategorized 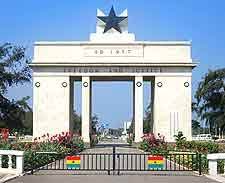 Monuments are significant historic features; most of these buildings indicate oppression, survival, and inventiveness. Ghana is internationally recognized as a progressive nation with unique culture, for instance, the Kente attires. Ghanaians greatly participated and contributed to the success of the trans-Atlantic slave trade during the colonial era. Most of these monuments are still in good condition following their excellent maintenance by the Ghanaian government. If you love history, then you should schedule your holiday to Ghana. The key monuments include;

The royal Wa family chiefs used to reside at Wa Naa Palace. It is one of the perfect monuments in Ghana. The place has been empty since the death of the last chief in 1998. The palace was renovated during the previous decade as the community anticipated a new chief to occupy this palace.

The Traditional Buildings of the Asante Kingdom

Although a large number of the traditional building of the Asante Kingdom were destroyed during the colonial era, there are still some buildings that exist. This historic monument in Ghana has thirteen houses by the Asante Kingdom. They were constructed in clay and mud walls, and the roofs are woven palm branches.

The Cape Coast Castle was constructed in the 1700 century, and it is situated in historic fortification. The Swedish African country constructed the ancient building and was later reconstructed by the British colonial rulers. Cape Coast Castle was transformed into a museum in the 1950s. Today cape Coast Castle houses some items related to histories such as archaeology, photography, and ethnography. There are other tourist attractions around this place, such as gift shops, making the site more attractive and worthy to be visited.

The Elmina Castle was constructed during the 15th Century, and it is mainly associated with the colonial heritage of this place. It is among the oldest British building in Ghana and the entire West Africa. During the Colonial period, this region served as a slave trade center. The Castle has several assortments of Elmina Castle photos. Elmina Castle and other construction in this region give a better picture of the colonial history of Ghana. The Ghanaian Government has renovated the castle over recent years, and it is currently in good condition. There are several tour guides who can accompany tourists whenever they visit this castle. There are fine restaurants and hotels near this castle where tourists can spend their nights.

The Osu Castle was built in 1661 and has been under the control of the Danes, British, and Dutch. It is also known as Fort Christiansborg, a magnificent attraction that can be spotted from a distance. Today Osu Castle is the seat of the Republic of the government of Ghana. It is a significant historical monument in Ghana, which was constructed between Ghana and Europe to ease trade and ensure success. Brandy and muskets were exchanged for gold and slaves at this castle.

The Danish-Norwegian constructed Fort Prinsensten. They built this site to serve as a military stronghold and ensure that other countries such as France, Germany, and Italy could not easily trade in Ghana and other countries around Ghana. Products like gold and ivory were transported from Ghana to Danish-Norwegian islands together with slaves. The intruding seas lead to the structural destruction of these monuments during the 1980s. Fort Prinsensten is an old monument in Ghana which was later converted into a prison.

The Kwame Nkrumah Memorial Park was constructed to honor the life of Dr. Kwame Nkrumah, the first president of Ghana. The Park is commonly used for state functions in Ghana. It is a famous monument in Ghana where Ghana’s independence Anniversary celebrations are conducted each year in March. This celebration usually is attended by various leaders across the world.

The Independence Arch is among the significant landmarks and the most famous monuments in Ghana. This Arch resembles the Arch de Triomphe in Paris. A huge black star is situated to the north of this Independence Arch. The Arch is an iconic symbol of Accra, and it is commonly used as a venue for various official events and parades. If you love history, you can’t afford to miss this historical site in Ghana.

Reasons you should visit Ada Foah.

Factors contributing to the Improvement of Tourism in Ghana