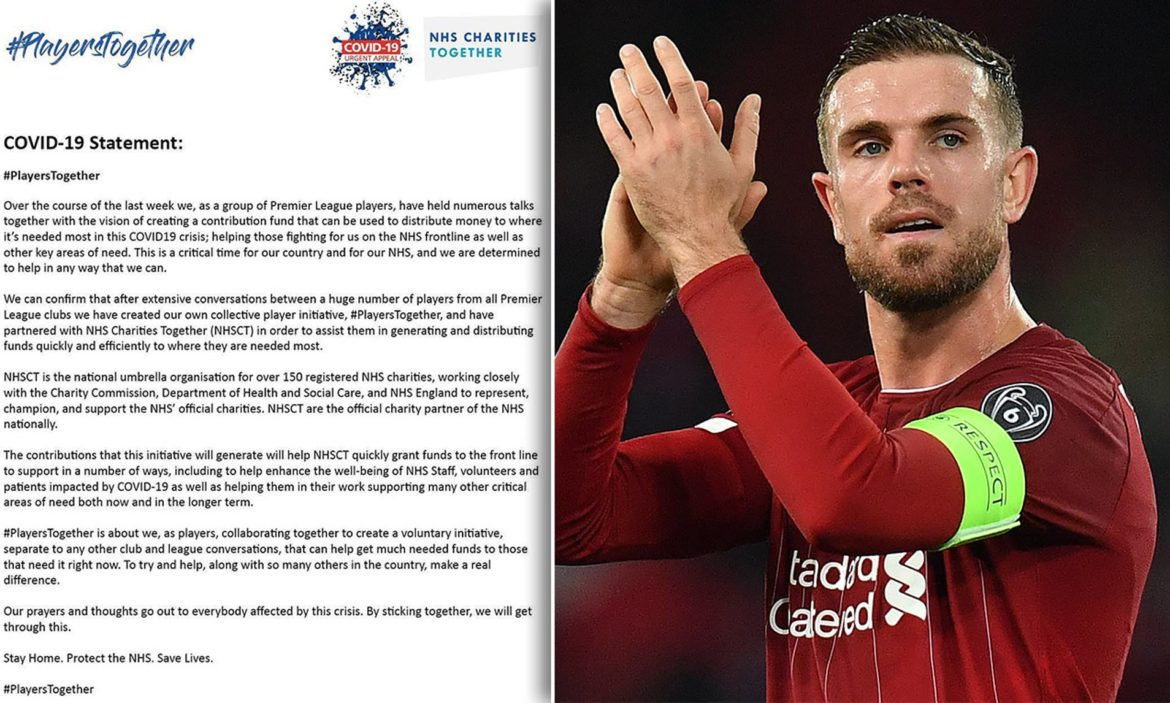 Premier League stars have formed an initiation called PlayersTogethher to raise funds to support the NHS in the fight against coronavirus. The players are mainly from Chelsea, Arsenal, Manchester United, Liverpool, and Tottenham. The initiative is said to have been started by Liverpool captain Jordan Henderson.

“Over the course of the last week we, as a group of Premier League players, have held numerous talks together with the vision of creating a contribution fund that can be used to distribute money to where it’s needed most in this Covid19 crisis; helping those fighting for us on the NHS frontline as well as other key areas of need. This is a critical time for our country and for our NHS, and we are determined to help in any way that we can.

“We can confirm that after extensive conversations between a huge number of players from all Premier League clubs we have created our own collective player initiative, #PlayersTogether, and have partnered with NHS Charities Together (NHSCT) in order to assist them in generating and distributing funds quickly and efficiently to where they are needed most.

“NHSCT is the national umbrella organisation for over 150 registered NHS charities, working closely with the Charity Commission, Demartment of Health and Social Care, and NHS England to represent, champion, and suport the NHS’ official charities. NHSCT are the official charity partner of the NHS nationally.

“The contributions that this initiative will generate will help NHSCT quickly grant funds to the front line to support in a number of ways, including to help enhance the well-being of NHS staff, volunteers and patients impacted by Covid-19 as well as helping them in their work supporting many other critical areas of need both now and in the longer term.

“#PlayersTogether is about we, as players, collaborating together to create a voluntary initiative separate to any club and league conversations, that can help get much needed funds to those that need it right now. To try and help, along with so many others in the country, make a real difference.

“Our prayers and thoughts go out to everybody affected by this crisis. By sticking together, we will get through this. Stay home. Protect the NHS. Save Lives.”