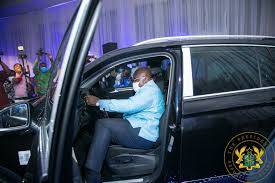 President Akufo-Addo on Monday the 3rd Aug 2020 unveiled the first Volkswagen vehicles which will be assembled in Ghana. The car manufacturer signed an agreement with the government in 2018 to open an assembling plant in Ghana which is meant to serve all western countries.

During the unveiling, Addo noted that Volkswagen had done him proud by opening the plant. According to the president: “Volkswagen has decided to assemble a number of its brands right here in Ghana, not only for domestic use but also for the West African market.

“Two years on, we have confounded the doubting Thomases, and I am happy to be here this morning to launch, officially, the first Volkswagen vehicle that has been assembled in our country. It is a good day for Mother Ghana.”

The car giant has been investing heaving in Africa having already established a car manufacturing assembly in Kenya.

Spiritualist who masterminded the killing of 90-year-old woman arrested