Reasons to Visit the Tongo Whistling Rocks and Shrines in Ghana 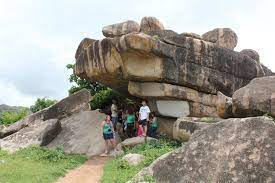 The Tongo region covers twenty square kilometers. Tourists visit this site because of its fascinating history and its religious significance. First-time tourists are met in this sacred place by volcanoes and mature stones formed on large rocks. The residents, especially women, take advantage of the heat from the sun to come up with unique visual artworks on the old huts in this place. Graphic artwork is part of cultural practice, which complements most of the tourist attractions on this site.

Tongo Whistling Rocks and Shrines Ghana are situated in Northern Ghana. It is a fascinating place where you can witness both traditional and religious lifestyles. It is commonly hot in this place, and therefore you should remember to pack your sunglasses, hats, and closed shoes. A trip to this site gives you a chance to attend festivals such as the Bo’araam festival, which matches the whistling rocks and shrines in October and November.

The rocks sound like the explosion of a whistle of a soccer referee. The significant part in the middle of this attraction is that the Holy Land and the Heavy Stone are joint where you can go through the ceremonial process and experience protection, luck, and prosperity sensation. Religious customs are done carefully in various scopes.

The huge rocks make rare sounds, mainly during the Harmattan season in November and December. Its name was derived from its occasional sounds. Normally, each shrine has its own rules and traditional customs of respect.

Tengzug is one of the most famous shrines in the northern region of Ghana; a large number of tourists visit this shrine each year. According to the traditions of this community, women are not permitted to enter the shrine. If you are planning to visit this shrine or even climb the mountain, do not wear red clothes because it is taboo. In the sacred shrine, a man is wearing only shorts seated there. According to traditions, the man’s goal is to reveal all tourists’ dreams of affluence. If you comply with the traditional position, you can undergo these traditions because it is not a sacrifice of force but a desire.

Each of the residents of this community performs the Boar Dam festival to celebrate a good harvest. The festival is held on the Ba’ar Tonna’ab Yanee Shrine and other Talensi ancestral shrines. The sacred Bat Tree at Baare is only three kilometers from the Tengzug shrines.

The Tengzug shrine was a refuge for the people of the north region. The people who were captured as enslaved people by the British escaped for their freedom and safety during the 19th century. They hid in the mountainous land for a day without any food; it was a hazardous situation for them. Birds and chickens are the common animals used for sacrifices in this shrine.
The Chief’s Palace

The first site to visit is the chief’s palace before visiting any other area. It is the largest palace in northern Ghana. The questions you have determines the time you spend with the chief. The palace has over three hundred and sixty people, including his wives. There are various stones with blood and chicken feathers. Although they look dirty, they are meaningful. When you walk around the cliff, you hear a whistling sound because the wind blows through the cave’s rocks and makes the whistling sound.

To access this site, tourists can board a public bus, taxi or rather rent the services of an air company from Accra through Kumasi to Tamale in the northern region. The type of public transport determines the arrival time at this site. When you use public transport, you can take three hours or even more than that.

How to start an online business in ten steps.

The Best Tips to Make Health and Fitness a Lifestyle Choice