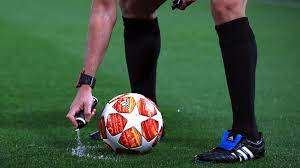 The Ghana Football Association has punished Referee Gabriel because of penalty controversy during a game between Ashanti Gold SC and Accra Hearts of Oaks in the Ghana Premier League. Besides, Referee Arhin and his Assistant have been suspended for the remaining 2020/2021 football season. Their Punishment is set to end after the first 8 matches of the first round of the next season.

The match review panel of GFA punished the referees after reviewing the footage of the video of week 19 of the premier league. During the 19th minute, the Ashanti gold’s Goalkeeper moved from the baseline before the Hearts of Oak striker kicked a penalty. The team pleaded to retake the penalty but the Referee did not listen to their request.

During the 91st minute, the referees punished the Hearts of oak with a penalty because the ball touched one of their players’ arms while he was in his natural position. This penalty was awarded against the law of handball. Due to these unfair penalties, the referee has been suspended.

Various TV stations will be shut down for not operating Legally.