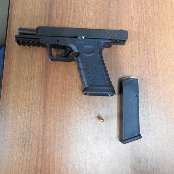 A suspected highway robber was killed by police as he attempted to attack passengers at Piisi which is near SD Dombo University. The incident occurred on the 24th of Aug at 2:30 am. The region is now on police watch after two other robbers were gunned down in the same area last week.

According to a statement from the police: “A police officer on board Hyundai bus with registration number AW 6036 -12 driven by Mahama Ahmed with passengers on board was escorting several vehicles from Axil base at Sawla in the Savannah Region to Wa as a routine duty core. On reaching a section of the road at Piisi, a small community near SD Dombo University – Wa, an unmasked young man aged about 23 emerged from a nearby bush per their modus operandi with a locally manufactured shotgun and signaled them to stop with a flashlight.”

The robber was shot by the officer on duty while attempting to rob the passengers. He was pronounced dead on arrival at Wa Municipal Hospital.