Home Sports The Black Stars will be Playing against Morocco, Comoros, and Gabon in 2022 AFCON.
Sports

The Black Stars will be Playing against Morocco, Comoros, and Gabon in 2022 AFCON. 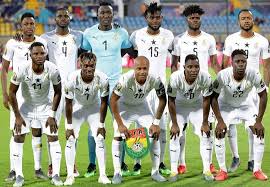 The Ghanaian Black stars have been paired in Group C ahead of 2022 AFCON. The Africa Cup Nations will be held in Cameroon from January 2022. The Black Stars will be playing against Morocco, Comoros, and Gabon in the Group phases of the Competition. The 24 countries who will be participating in the AFCON Competition had a chance of interacting with each other during a colourful ceremony at the Palas de Congress Hotel in Younde.

Despite Black star’s poor performance during the 2019 competition and they still have hope of becoming the new winners during next year’s competitions. Ghana won the AFCON Title in 1982 in Libya.

Barima Sydney says that he only believes in Jesus and not God.

Aristide Bance has finally spoken about Beating Ghana during the 2013 AFCON.