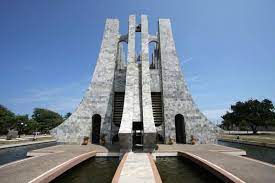 Kwame Nkrumah is a historical tourist attraction site located in Accra city. It was constructed in 1992 as a tourist site to preserve the memory of Dr. Kwame. Dr. Kwame Nkrumah declared independence in this park in 1957 in the company of other freedom fighters. The park was set aside to acknowledge the excellent work of Ghana’s first president. It is a significant monument that indicates its historical importance. Dr. Kwame and his wife’s tomb is situated in this park. Kwame Nkrumah is a significant site in Ghana, where important national events are held.

Dr. Ibrahim Mohammed Awal, the Minister of Tourism, Arts, and Culture, was present at the event to launch the renovation of the Kwame Nkrumah memorial park. The park has been neglected for so many years, and its conditions are not pleasing at all. The Ministry of Tourism in Ghana hopes that renovating and modernizing the Kwame Nkrumah Memorial Park will attract more tourists in the future. Besides, the modernization will match the status of Dr. Kwame Nkrumah and other founding heroes of Ghana.

This project has been allocated three million US dollars under the World Bank Tourism Development project. The renovation and modernization of the park are scheduled to end next year as the 66th independence anniversary will be held there. The Minister is certain that the rehabilitation and modernization of the park would boost both local and worldwide tourism and boost Ghana’s ranking as an investment and trade destination. “Tourism, Arts, and Culture has the potential to contribute significantly to national development and job creation, and I want to assure Ghanaians and the international community that the rehabilitation and the modernization of the park will be done expeditiously so that the park is opened by March 2023 to coincide with the country’s independence anniversary,” he stated.

Presidents Nana Addo Dankwa’s government has been praised for taking the initiative to improve the tourist attractions sites of Ghana. If the government had not taken this initiative to renovate the site, it would have deteriorated, resulting in its closure. Nana Addo’s government’s ruling does not align with the late Kwame Nkrumah’s tradition and way of ruling. The president’s act and his government indicate love and unity despite the differences between the two leaders. Politicians are reminded to honor and acknowledge the good works of all those who devoted themselves to developing the nation and ensuring that all people live well. They should not belittle, insult, or ignore their opponents’ contributions to the growth and development of the nation.

The biggest aim of renovating this monument is to improve the general picture of the tourism sector in Ghana. This will, in turn, increase the overall revenue earned from the tourism sector and generally national GDP. As part of the development of Dr. Kwame Nkrumah Park, other facilities will be constructed in this park to honor his fantastic work for Ghana. These facilities include a museum, a presidential library, a restaurant, a training center, a VVIP lounge, an artistic freedom wall, and a music and light foundation to improve the night tourism experience. With the addition of these facilities, more than fifty direct jobs and indirect jobs will be created. It is a significant project for society because it will lower unemployment and other risks associated with unemployment, such as robbery.

The tourism ministry believes that after the modernization of this monument, it will fall under the same category as George Padmore Library and WEB Du Bois Centre for Pan-Africanism to improve the Pan-African Triangular Centre. Additionally, Ghana’s position as the leading Pan Africanism and diasporan research Centre will improve.

Ghanaian Youth TV Shows that are worth your time.

All you need to know about the Paragliding Festival