The Pikworo Slave Camp Of the Upper East Region 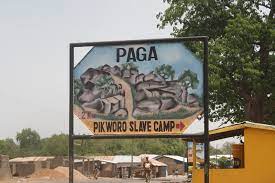 The Pikworo Slave Camp was established in 1704 in the Upper East Region of Ghana. It served as a slave’s holding place from northern regions of Africa, Burkina Faso and other neighbouring societies. The camp was initially a slave shipment centre for Ghanaian traders, slaves were sold here and later transferred to the Salaga Slave market for shipment to foreign countries such as Dutch, France, and Britain. It is a disheartening picture of what used to be done here during the colonial days.

According to the locals, Pikworo means “place of rocks”. The slave masters choose this place because of its distinctive Scenery. This camp was known as the old Slave Camp in 1992 and was later recognized by the Ghana Tourism Board in 2002. Bagua is the original founder of the Pikworo, he had ruled and converted this place into a slave camp without consulting anyone. The Ghanaian masters worked for white men on the coast, and their key roles were to provide slaves to the white buyers.

Three main huts and rocks are the first sights you see when you get to this place. There are several sights of rock foundations. On top of a collection of rocks, there is an incision of the largest stones where the slave masters used to draw water. Near the largest rock, there are artificial scoops, the scoops are bowls made by slaves who tried to escape from this camp and were followed by the masters.

The slave traders watchtower, mass grave cemetery, the punishment stone are among the key tourists’ attractions in this camp. The slaves were retrained in trees and their eating utensils were burrowed into rocks.

The slaves were only served one meal each day during the evening hours. The female slaves acquired few resources from their leaders to prepare meals that could not satisfy them. The size of the holes in the rocks determined the number of slaves served out in a vessel.

The meeting place of the slave is a key site in this camp, the masters stood here to select the slaves who they were to transport to the Salaga Slave market. Before selecting the slaves, they could first scrutinize all the slaves to check the most suitable ones depending on the market requirements.

The Watchtower of the slave raiders at Pikworo camp was ever occupied to check if there were people around the camp who wanted to rescue the slave from the captive. In case there was something not right, the watch person would blow a cow horn to inform all the people at the camp.

Also read: The Fascinating Tourist Attractions in the Volta Region

The Cemetery has so many graves for the slaves who died while at this camp. The graves are marked with huge rocks bounded by a circle of small rocks. Most slaves died because starvation, ruthless punishment, or snake bites. It is a disheartening scene.

The Rock of fear commonly known was the punishment rock is where the slave sat with their hands tied behind their back and the legs crossed. It was compulsory to watch the sun from dawn to dusk as a punishment, and this resulted in the loss of sight to most of them.

Although the management organized drumming entertainment sections for the slaves, it sounded like consecrate rocks.
A total of around 200 slaves were held at the Pikworo slave camp at any given time. The slaves were transported to the Southern Coast for Trans-Atlantic Sale. It took 60- or 90-days walking on foot without any shoes to the Southern Coast. The slaves were half-naked travelling in varied weather conditions and their masters rode on horses.

Although there is minor evidence of the history of this camp, with the guidance of the tour guides you get a better picture of what used to happen here during the early days. There are several activities and things that tourists can participate in while at this camp.

The Traditional Shrines in Ashanti Ghana

Why you should Visit Mountain Afadjato in Ghana