Home Culture The significance of Emancipation in Ghanaian Culture
Culture

The significance of Emancipation in Ghanaian Culture 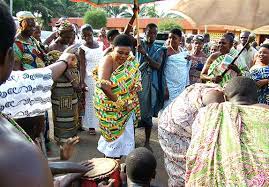 Emancipation is a significant event held each year. This event was initially celebrated in the Caribbean to honor the final abolition of Chatel Slavery in the British colonies in 1834. Ghana was the first African country to participate in the celebrations in 1998 to re-confirm its status as the Gateway to the African continent of Diasporans.

Ghana served as the exit point for slaves on the West Coast when the dishonorable trade was being conducted. Today, approximately forty forts, castles, and lodges used for the slave trade are still present in Ghana. St. George’s castle and St. Jago fort at Elmina and Cape Coast Castles were selected as UNESCO to be World Heritage sites.

Currently, Ghana is developing the Slave Route to complement other historical sites related to the slave trade. This route aims to restore, promote, and rehabilitate the physical and non-physical heritage of the slave trade. The route features all the communities that fought against the slave raiders, such Gwollu and Nalerigu, who constructed defensive walls and other slave market sites such as Saakpili and Slaga. Other sites include the slave bathing rivers and slave burial at Assin-Manso and many others.

The Emancipation Day celebration for this year has officially been launched. It was launched in Accra, and all the African nations were requested to stay devoted to better integration among them to build sustainable prosperity. Emancipation Day is celebrated on Heritage and strength, and this year’s theme will be ‘Re-engaging to consolidate our development plan. The purpose of this year’s celebration is to revive the flame of unity among the black people in Africa and the sixth region.

The emancipation is a series of events starting on July 27, 2022, and ending on August 1, 2022. Some key ceremonies include the Wreath-laying ceremony in Accra at the George Padmore Library and the WE DuBois Centre, a durbar of chiefs at Assin Praso, and a musical show. A masquerade show will also be conducted on cape Coast. A candlelight procession at Pikworo Slave Camp in the Upper East Region and a reverent night in cape Coast will follow. The most significant celebration is unveiling of a third tomb that will be held on August 1 at the Reverential Gardens at Assin Manso.

During the launch, the Deputy Minister of Tourism, Arts, and Culture requested Africans to think of their ancestors’ blood and sacrifices to fight for independence. According to him, the stability and success we are currently experiencing result from their sacrifices. Their goal was to ensure that the succeeding generations stayed well. The Deputy Minister of Tourism maintained that Africa is a big family united by culture and identity.

The Deputy Minister of Tourism revealed that they have a goal of raising four billion from two billion tourists before 2024 through the tourism and cultural resources of the nation. To repair and restore the status of some tourist centers such as Cape Coast and Elmina castles, the Kwame Nkrumah Memorial Park, the Kakum and Mole parks, and cultural museums in Yendi, the tourism sectors had allocated $25 million to the projects.

Speaking during this year’s Emancipations, the Chairperson of the Panafest Foundation, Professor Esi Sutherland-Addy, said, “The kind of emancipation we need now is not from chains on our bodies, but in our minds. That is what we need to work on; work on getting away from dependency, looking at what we have internally.” The chairman said they should focus on boosting the natural resources and working on making the nation a better place for the next generation.

How to show respect in Ghana