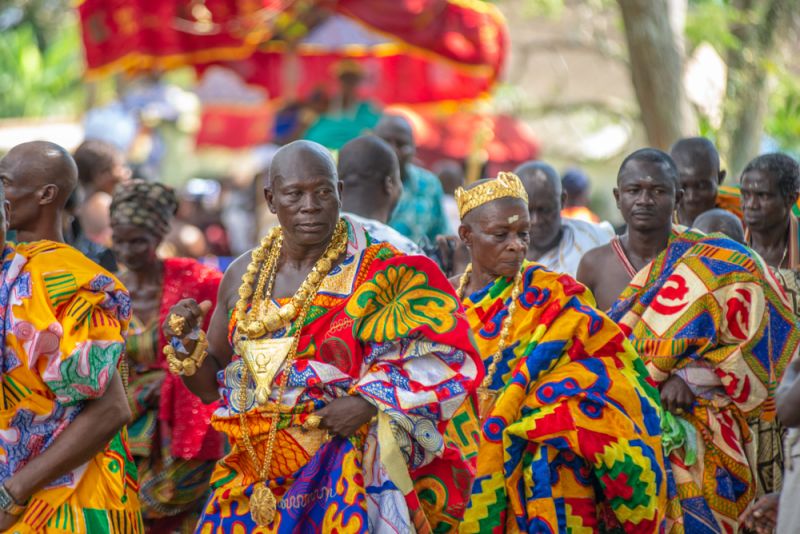 Accra Food Festival is a food festival that attracts food lovers from various parts of Ghana and the world. Once the delicious meals are prepared, they are served on plates and displayed in tents at affordable prices. Both traditional and non-traditional Ghanaian and non-Ghanaian foods and drinks are prepared in a favorable environment during this festival. It is a great event that you should add to your bucket list during your vacation in Ghana.

Nkabom Literary Festival comprises spoken word artists, novelists, network poets, photographers, DJs, theatre artists, musicians, and illustrators, among other creative people. This is a fantastic ceremony where people present varied literature content. Nkabom Literary Festival has contributed significantly to the growth and expansion of the literature world. The theme of the festival varies from year to year.

CHALE WOTE Festival is a lively event that attracts a large number of people each year. This event involves the interactions between artists and intercontinental associates in Great Accra. This significant festival is held in one of the most historical communities in Accra that served as a movement, sales, and imprisonment port during the colonial days. CHALE WOTE Festival is so refreshing; it is a platform to relink with intuitive concepts formulated for free through conversations, performances, and extensions of culture. The festival takes place in Augusts, and the theme for each year is varied.

Sabolai festival is an interesting festival that takes place every year in December in Accra. It is a music festival that attracts most music lovers from all over the country. Sabolai festival plays the best original music from the mainstream, the modern scape to traditional display, blends, and non-orthodox streams. The first Sabolai festival was held in 2010, and since then, the event is usually held annually.

Efua Sutherland started the Pan-African Festival in the 19th century as a scheme to impact visits for Africans from all parts of the globe. The Pan-African Festival of Art and Culture comprises all cultural and historical legacy aspects and awards. This ceremony has united so many Africans based in various places and each so many people travel to Ghana to attend this event.

Homowo means hooting at hunger. It is among the most renowned festivals in Ghana, held in Accra city every year in May. During the Homowo Festival, all the chiefs of the Ga Traditional sprinkle a special meal known as kpokpoi in the streets. This dish is made using cornmeal and palm oil. The event involves pouring libation and traditional singing; the leaders say some petitions to the gods for another good season.

The Elmina people hold the Bakatue festival, and it signifies the discharge process at Benya inlets to initiate the fishing season. The festival involves a lot of activities to honor the gods, such as the net casting ceremony where the fish caught is given to the gods. According to the Elmina community, the gods intervene in supporting the fishing community. This festival is celebrated every year in Elmina on the first Tuesday in July. Chiefs are the main guests of this festival, and people dance and drum and display canoes on the Benya inlet.

The Asofotufiam Festival is held by the Ada people who live in the eastern region of Accra. The ceremony is held to remember the defeats and victories in past crashes with Asofotufiam and also introduce the harvest season. All the ritual regulations are observed during this event.

What Ghana Should Understand to build a booming Tourism Industry