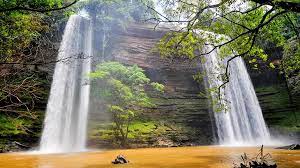 There are several traditions associated with the origin of the Kundum Festival. One tradition reveals that a hunter from Aboade encountered dwarfs dancing to some weird songs during his hunting excursion. The dwarf creatures danced for one month and later moved to the neighboring villages to dance. Another tradition reveals that there was a palm tree in the village, and Its fruits used to ripen one time each year. The ripening period became very significant in the calendar of these residents. The villagers marked the festival’s beginning with the palm fruits ripening.

Several communities celebrate the Kundum Festival, including the Nzemas, Ahantas, and the Sekondi people. The Sekondi were the last community to adopt this festival after settling at Sekondi. Even though there are so many similarities in how the three communities celebrate this significant festival, there are still several distinctive features in how every region celebrates Kundum Festival. One of the unique features of the Kundum festival is that it starts from one region to another; therefore, you can attend it in another district in case you miss attending the previous one.

The Sekondi Kundum Festival is a harvest festival, a period to remember the dead, set new goals for the starting year, and purify themselves. The people commemorate their ancestors and request help and protection during the Kundum Festival. Besides, this festival is used to cleanse the entire community.

The modern economic development and the western cultural influence have somehow altered how the festival used to be done in the ancient days. When the top chief sits in the municipal to receive tribute from the other chiefs, they schedule development projects and come up with ways to raise money to finance those projects.

The Ankasa Conservation Area is an endangered wildlife region covering the Ankasa Resource Reserve and Nini-Suhien National Park. It borders Elubo town on its Southwest side, and the town is only five kilometers from this reserve. Ankasa conservation region is located in a region that receives the highest rain in Ghana; hence it is a rich area in terms of vegetal assortment in the nation. It is the only place in the wet Evergreen Forest Zoo. This region is approximately 500km2 in the Western Region of Ghana.

The Ankasa Conservation region is an essential treasure in Ghana due to its natural resources. These resources are sufficient to be included on the international tourism map as exceptional and the Ghana’s tourism address.

Fabulous Beaches of Ellembele and Half Assini Area

Nzemaland is a famous tourist destination in Ghana because of the cool beaches situated in Ellembele. Ankobra Beach and Axim Beach are the best recreation sites in this place. While visiting these beaches, you can tour Boboayiyi island, which is offshore. There are beautiful beaches between Beyin and Half Assini, which offer fantastic boating and water sports activities opportunities.

Initially, the late Kwame Nkrumah’s grave was at Nkroful in Nzemaland before being moved to Accra. The tomb is eighty-three kilometers to the west of Takoradi.

The Village on Stilt of Nzulezu

The Village on Stilt of Nzulezu is situated ninety kilometers to the west of Takoradi. It is a beautiful village where houses are constructed on Stilts, and the residents have already adapted to the moist environment. A visit to this village involves a walk through the reeds along the lake and a trip in a foxhole canoe to the village. You can tour this village any day of the week except Thursday because it is a sacred day.