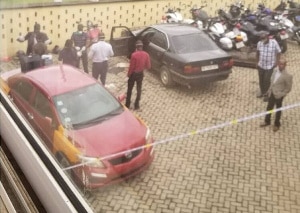 Two suspected thieves were gunned down at Atasamanso New site in Kumasi after a shootout with police. The robbers who were part of a 6 member group called AK-47-wielding are said to have been conducting robbery activities in the area. They are said to have panicked after seeing police moving towards them and therefore opened fire.

Four of them managed to escape. One police officer sustained a gunshot wound during the exchange. Police blamed the escape of the four on the crowd which gathered to see the shootout giving the thieves an opportunity to escape. Police recovered one AK-47 from the robbers and a BMW which they were using.