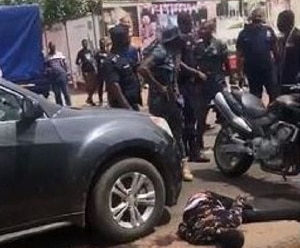 Two suspected thieves have been shot dead in Kumasi. The two were confronted by the police and instead of surrendering to the police, they decided to engage them. The exchange led to the injury of two police officers who are currently admitted to the hospital.

The vehicle used by the thieves has been seized by the police. The police also seized crude weapons used by the thieves in their activities. The deputy regional commander of the Ashanti region said that investigation was still going on to establish other members of the gang.