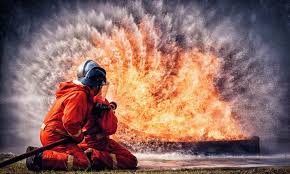 The Royal Foam Company Limited based in Asokore Mampong Municipality is counting losses after a fire destroyed two-thirds of the company. The fire consumed almost all production materials which were mainly inflammable chemicals. The fire was so intense that it took the Ghana National Fire Service more than two hours to control it. The GFNS had brought in 6 fire machines to help fight the fire.

As much as no casualty was recorded the GFNS was blamed for arriving late at the factory. However Desmond Ackah of the GNFS rubbished the reports saying that fire engines were at Royal Foal Company within 5 minutes. He added that the biggest challenge they had fighting the fire was the fact that the company did not have a fire hydrant.

According to Mr. Ackah: “By 8 p.m., our men managed to bring the fire under control, stopping it from spreading to the other parts of the factory. Our major challenge was the absence of a water hydrant at such a factory, and the bad reportage from the electronic media made our work difficult.”