Have never ordered anybody to humiliate journalists -Kennedy Agyapong 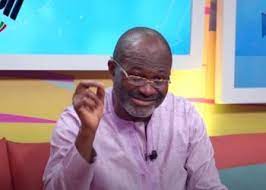 The member of parliament for Assin Central Kennedy Agyapong has refused the claims that he incited the public to humiliate Erastus Asare Donkor of Luv FM. Speaking during an interview, Kennedy accepted saying that if he was the president of Ghana, he would ensure that Erastus is beaten. He insisted that he never mentioned death in his statement.

“Who is he? Which kind of human is he? Is he better than those who are dead? He is not better than them. I never said he should be killed. I said that if I were the president, I would have lashed him and beat him. I never said anyone should attack him,” Kennedy stated.

Besides, Kennedy blamed the Tamale North Mp for this issue in parliament. “You cannot use the media and police to gag me. You make a statement that I should be referred to the privilege committee, I want to insult him. He is a foolish MP. Sihiyini is so stupid. He hasn’t achieved anything in life so he wants Ghana to burn down. I’m so disappointed in him. He uses everything for politics. They have taken me to the privilege committee, they think MP is the only thing I rely on. If they are removed from parliament, I will continue to tell the truth. No one can stop me,” he stated.

Chief reveals how he caters for his 47 wives and 240 children.