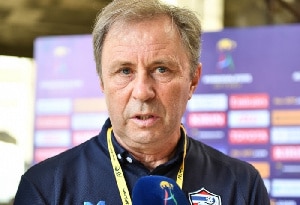 Vincent Sowah Odotei has insisted that it will be a ‘risky choice’ for Ghana Football Association (GFA) to select Milovan as Black Stars, senior coach. The GFA is expected to announce a new coach very soon. Some reports indicate that Serbian Rajevac might replace Charles Akonnor. While responding to the news, Sowah said, “I think it is a step in the wrong direction. When you look at Milo’s performances, his football philosophy, and when we look at what he has done since he left the Black stars and as a country what we aspire to be, I think it’s a risky choice.”

“I don’t think the considerations, the terms of reference given to the committee, I don’t know what the bigger considerations in the whole paradigm what we call these days in football as the project and the criteria that bring in Milovan Rajevac. It is a risky thing, and I hope that my colleagues at the FA will take a deep breath if they have not taken the decision already and then look at what is good for this country.”

President Akufo-Addo says that Democracy has been of great importance in Ghana and Entire Africa.

A body of an unknown man has been Found at the Shores of River Asuoyeboah.