Home Politics Check Out These Other Sleeping Politicians
Politics

Check Out These Other Sleeping Politicians 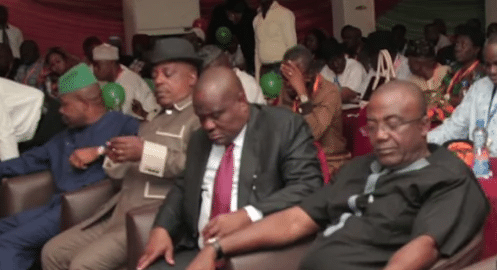 Last week about 40 leaders from Africa went to the southern City of Sochi for the African summit in Russia. According to the president of Russia, the summit was a new beginning for the relations between Russia and Africa. Russia is already in a relationship with Africa as it’s the largest supplier of arms. The summit aimed at restoring links that were destroyed after the collapse Soviet Union.

A video of President Akufo- Addo of Ghana was trending nationwide where Akufo-Addo is seen with his head down during one of the presentations. Akufo-Addo is not the first leader caught sleeping on the job. Below is a list of other politicians who have been caught on the wrong side of the camera.

Ezenwo Nyesom Wike is a Politician and a member of the ruling People’s Democratic Party. He was caught sleeping at a retreat for elected Peoples Democratic Party National Assembly members in Port Harcourt, Rivers state.

He served in the army as a General before becoming President of Nigeria from 1999 to 2007. The former president was caught taking a nap during the meeting with World Bank President, Dr. Jim Yong Kim

South African politician and the then Minister Maite Nkoana Mashabane was caught napping in Parliament by EFF Mbuyiseni Ndlozi. Ndlozi raised the issue and chaos broke out shortly after.

African leader and former President, Robert Mugabe has been caught sleeping 9 different times during different functions. One of the times was when he was elected  as Chairman at the AU Summit in Addis Ababa, Ethiopia.

Ugandan President Yoweri Museveni was caught sleeping in parliament in 2014, however, according to the government, the president had a habit of meditating hence the reason his eyes were closed.

Efia Odo to star in UTV ATUU this Saturday