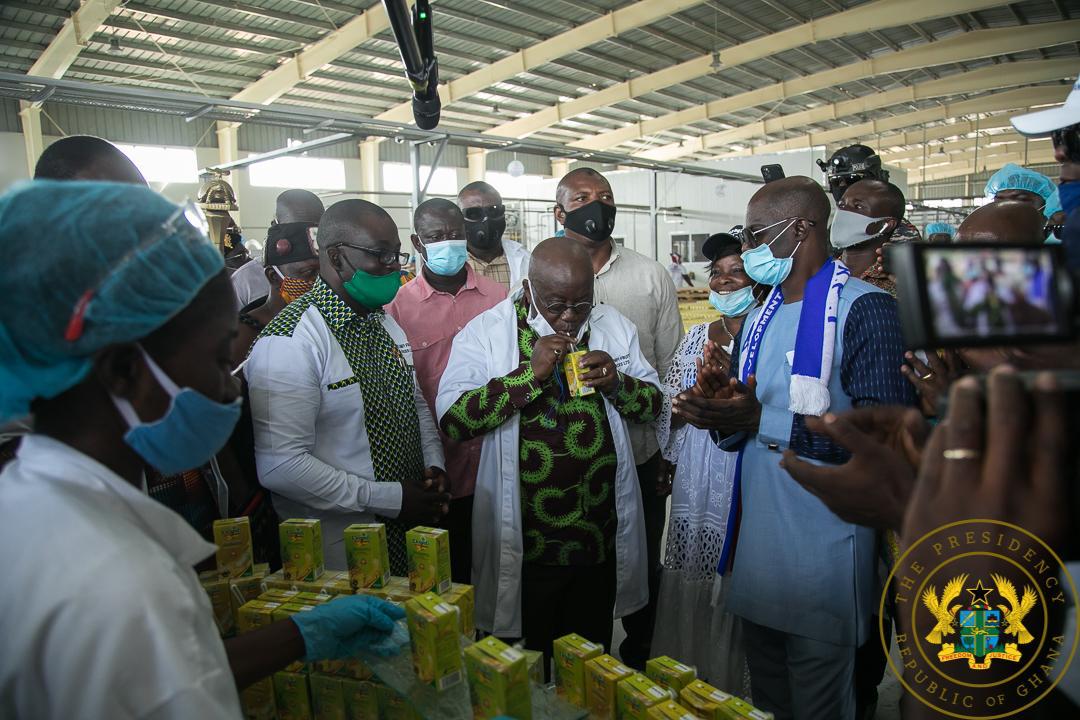 President Akufo-Addo on Friday 21st Aug 2020 commissioned the Ekumfi Fruits and Juices Factory a project which is under an initiative called One-District-One-Factory. During the commissioning, the president noted that the factory was fully owned by Ghana and that it was one of the best and most modern factories in the country.

According to Akufo-Addo: “A total investment of $15 million, of which $10 million was a facility from Ghana Exim Bank, has been made. Presently, the production capacity of the factory is ten tonnes of processed juice per hour, utilizing some ten thousand fruits per hour. This means that this factory requires four acres of pineapple fruits to be harvested for processing every hour.

“Nearly, three years down the line, we have confounded the doubting Thomases, and I am very happy to be back here in Ekumfi, and, indeed, very proud to commission the Ekumfi Fruit and Juices Factory. As we can all see, this project has been well-planned and well-thought-through, with the raw materials needed for the successful implementation of this project already present, and an out-grower scheme in place.

“The Ekumfi Fruits and Juices Factory is yet another example of the Government’s determination to promote the industrial transformation of our country. The government will continue to partner the private sector to establish similar modern factories, and which would be globally competitive, and take advantage of the African Continental Free Trade Area, which will begin trading on 1st January next year.”

The president added that the factory was geared towards creating employment for the youth in the rural areas. He added that more districts were in line to benefit from his projects. After the commissioning of the factory, the President proceeded to inspect the construction of a landing beach in the Gomoa West District. The president has been insisting that his administration has done more than that of his competitor and former president John Mahama.

The second phase of disinfection in Tertiary institutions has started