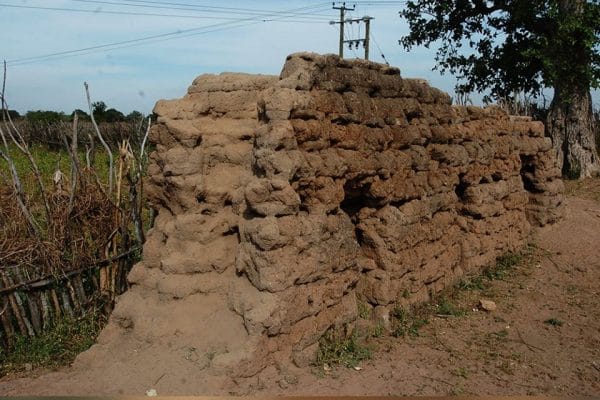 Slave Defense walls are historical monuments in Gwollu town; they are a sign of the dark Ghanaian history related to slavery. Although the defense walls were initially many, only two walls are remaining in the northern region of Ghana. The slave trade was eliminated in the 18th century in England and the United States; however, there was still slave demand in West Africa. The walls were constructed in the 19th century as a hiding place because the transatlantic slave trade was still running in Ghana.

Following the frequent attacks from slave traders, Kuoro Tangia, the leader of the Sisalla group, constructed the double-ringed defense walls to guard the town. The homes in this region were protected by the thick inner wall, while the outer defense wall surrounded the farms and water sources.

The walls are very strong and simple constructed using mud and grass bricks. Society constructed the walls willingly, without anyone pushing them. The walls have triangle spaces in between to serve as a viewing point in case of any danger. According to history, each slave wall was constructed within a period of two to three years to prevent the raids from accessing the town.

Though the walls are remote, most tourists, especially history lovers, still visit the site. The walls are situated at the far end of the northern region of Ghana, near the border of Burkina Faso. The lack of suitable infrastructure in this region demotivates so many people from visiting the site during their vacation in Ghana. The shortest path of accessing these historical sites is by driving from Navrongo to Tumu to Gwollu. Although it is 150km, the journey to this point makes takes up to five hours when using private means of transport. Public means may take up to eight hours, including all the stops and delays.

It is a must to greet the chief of this community during your visit. The Chief is the one who grants tourists permission to tour the historical monuments. Besides, if the chief has time, he can explain his community’s incredible history and culture. So as to maintain the structures and buy libation offerings for Dr.Hilla Liamann’s grave, tourists requested to contribute a small amount of money. Dr. Hilla Liamann was a former president of Ghana, and his grave is located within the chief’s compound.

Tourists are allowed to take pictures at the slave wall; however, they should request the chief’s authorization before taking photographs within his palace because there are some tombs and shrines that are sacred.

To protect the historical sites, a portion of the slave wall is fenced and covered to protect it from heavy rains, animals, and human beings. The location of this wall significantly contributes to its good status, being situated near the palace of their chief. It is always under the chief’s watch, and therefore no one can destroy it.
Though the knowledge of preserving and shielding historical structures is still a problem in Ghana, these slave walls receive proper protection because local and international sponsors still care about the site. The United States has been contributing to ensure that the walls remain in good condition.

Kuoru Kuri-Buktie Limann IV is the supreme chief of the Gwollu community, and it is advisable to see him during your tour so that he can elaborate more about the site. Although the Ghanaian government is trying to preserve most historical sites for future generations, it is a bit challenging. Tourism is one of the key features that motivates the government to maintain most historical sites. Besides, the tourism sector has been creating awareness and educating people on the importance of history in the modern days. If you have never visited the slave walls, it is good to include them on the list of your destination sites in Ghana, during your holiday.

Why You Should Explore Northern Ghana

The Reasons to Visit the Shai Hills in Ghana