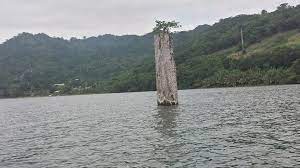 Lake Bosomtwe is the only inland lake in Ghana; it is situated in the Ashanti region. The lake was formed in 1648 following a meteorite strike in the Ashanti area. It is a fascinating place around lush mountains, a great place to relax and enjoy nature. Lake Bosomtwe is 70-73 metres deep, and it covers 49 square km. The magnificent lake does not have an external outlet and has several small inlets that run down the crater’s sharp sides. It is among the six UNESCO chosen biosphere reserve sites in Ghana.

A hunter chasing an antelope shot it, and it vanished in a small pond. The hunter settled along that pond and never went back to his home. He later named this place Bosomtwe, which means antelope god in Ashanti. According to him, this water was a god, which saved the antelope.

Also read: The importance of Tourism to Ghana.

The Southmost part of Lake Bosomtwe connects to the northern part of the Bosomtwe Range Forest Reserve, forming forest, swamp, and mountain ecosystems. This area is mainly relied on by researchers on issues related to climate change and conservational education for schools and universities. The Biosphere reserve is home to 35 different types of trees; some species are ideal for timber. The critical commercial timber trees species include Ofram (Terminalia Superba), commonly used for construction; emeri (Terminalia ivorensis), normally used as carpentry timber for both interior and exterior purposes; and African Mahogany (Khaya Senegalensis) used for therapeutic purposes.

Additionally, the site houses various wildlife and a large human population of more than fifty thousand residents. The region has several species of wildlife that are internationally and locally recognized as vanishing. The endangered in this region include palm squirrel- Epixerus ebii, giant pangolin-Manis phataginus gigantea, black and white colobus-colobus vellerosus, and two-spotted palm Civet-Nandinia binotata.

The key economic activities of the people residing here is fishing, tourism and farming. Lake Bosomtwe is a source of income; its water is used at home and for agricultural activities.

There are several interesting tourists’ activities that visitors can participate. The key activities include boat rides on the lake, swimming, and hiking in the mountains around this place. The communities that have settled around this lake are very friendly and welcoming. All the villages around the lake region have their own shrine, a large number of the residents visit the shrine to seek spiritual help. Although most of them converted to Christians, a large number still believes and worship the traditional gods in uncertain times.

A huge stone known as Abrodwun along the lake is alleged to be the spiritual centre of the lake. Generally, when the communities have a poor harvest, this huge stone is considered as a bad omen, and therefore sacrifices are made. The sacrifice is offered in the presence of the Asantehene, where the intestines of a cow are offered to the stone and the other parts discarding into the lake. Most people run into the river carrying axes to pick their share of meat.

According to the culture of the communities, the lake is a sacred site that is alleged as a transit point for the dead, and therefore people are not allowed to fish at the lake with a dug-out canoe.

Today, lake Bosomtwe is in great danger due to overfishing and unverifiable agricultural activities. The communities are practising careless farming; they are converting the neighbouring hills into cultivated lands, causing soil erosion in this area. As a result of climate change, the water levels at this lake are slowly reducing. To protect this fascinating ecosystem, some measures should be put in place to ensure the neighbouring communities continues to benefit from this lake.

Lake Bosomtwe is a beautiful tourist site; nature lovers can consider visiting this place to experience its greatness. There are sufficient accommodations where tourists can spend their nights exploring the sceneries around this place. There are restaurants which serves well-prepared meals to all tourists.

The Key Birding Sanctuaries in Ghana