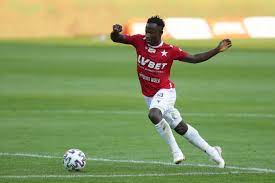 On Monday, FIFA expressed their joy concerning Yaw Yeboah’s outstanding goal for Wisla Krakow in Poland. FIFA Tweeted after a video of Yaw’s stunning goal went viral, their caption read, “WOW, Begin your week with this remarkable solo goal from Yaw Yeaboah.” The Ghanaian Footballer was featured, representing his club in the Polish top-flight league. They were playing against Gornik Leczna.

During this game, Yaw Yeboah received a pass in front of the Gornik Leczna area, twisted and turned, and he faked it several times before firing into the back of the net an irresistible low drive. With the video trending on all internet platforms, most people have commented, claiming it is a Puskas award contender.

Ghanaians in Germany have requested Akufo-Addo to fix the Country.

Francis Dodovi has suggested that all Rich young Men Should be investigated to know the source of their Wealth.