Home News A young man who stole ‘Sakawa’ ring from a friend has been requested to sacrifice a baby before the ring is removed.
News

A young man who stole ‘Sakawa’ ring from a friend has been requested to sacrifice a baby before the ring is removed. 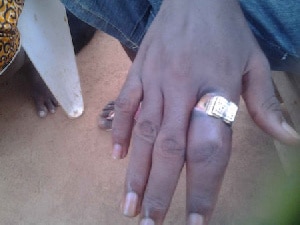 A boy aged 19 is almost losing his finger and life for wearing a ring made for spiritual missions. The teenager who lives at Kasoa Iron City in the central region stole the ring from his friend.

Many efforts have been put to remove the ring but half of the ring has been cut off and the remaining half is still at the forefinger of the teenager. A few pastors and spiritualists have tried to remove it but have not succeeded.

The owner of the ring revealed that he was told that the spiritual ring should not come into contact with water and in case it does there will serious consequences. Furthermore, he said that the only way the ring can be removed is by sacrificing a baby.

Daniel Obinim has revealed that he usually steals from the world Bank Spiritually.