Home Sports Abdulai Sabit has expressed his joy for playing on the same pitch with Messi.
Sports

Abdulai Sabit has expressed his joy for playing on the same pitch with Messi. 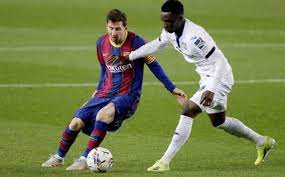 Abdulai Sabit has revealed it was a great experience playing with Lionel Messi on the same pitch. Abdulai is currently playing for Getafe. While speaking to BBC Sports Africa Sabit said, “Before the Barcelona match, I had the feeling that I was going to get maybe five to ten minutes playing time but when the coach made the selection, he kept one or two best midfielders on the bench. So, I told myself maybe even if there were going to be substitutions it would be them because they’re the starters.”

“When we went for half-time in the dressing room the coach mentioned my name that I should go and warm up. I was surprised. I can’t even describe it. I was overwhelmed. When the referee whistled for the start of the second half my mind was focused on the game but when I was getting close to Lion Messi, I was asking myself: is this Messi I am going to meet? I couldn’t believe it. Although the results weren’t good for us, I felt happy playing against such kind of a player,” Abdulai Sabit revealed.

According to Sabit, he did his best during this game. He said that he is waiting for his team to decide.

Morris Babyface has revealed that he cried after sleeping with many ladies.

A doctor Poisons his fellow doctor’s water with HIV-infected blood.