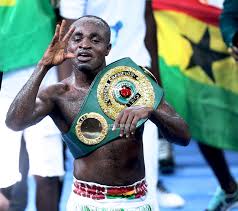 For the past months, Tagoe has been in Miami preparing for the bout. He was supposed to fight Denis Berinchyk of Ukraine in a final eliminator, nevertheless, the highly waited bout did not occur. The bout scheduled for the Seminole Hard Rock Hotel and Casino, Hollywood, Florida, United States of America will witness the most advantageous boxer from Ghana take a step nearer the direction of reaching the World Boxing Organisation (WBO) lightweight title.

Emmanuel “Gameboy” would seek to continue with his impressive winning streak against the 32-year-old American boxer. In August 2019, Menard made his last debut in the ring against Travis Hartman. He recorded an exciting unanimous decision win.

Students with PTA arrears to be sacked – Dr. Matthew Opoku