Find out what Steve Harvey felt after his visit to Ghana 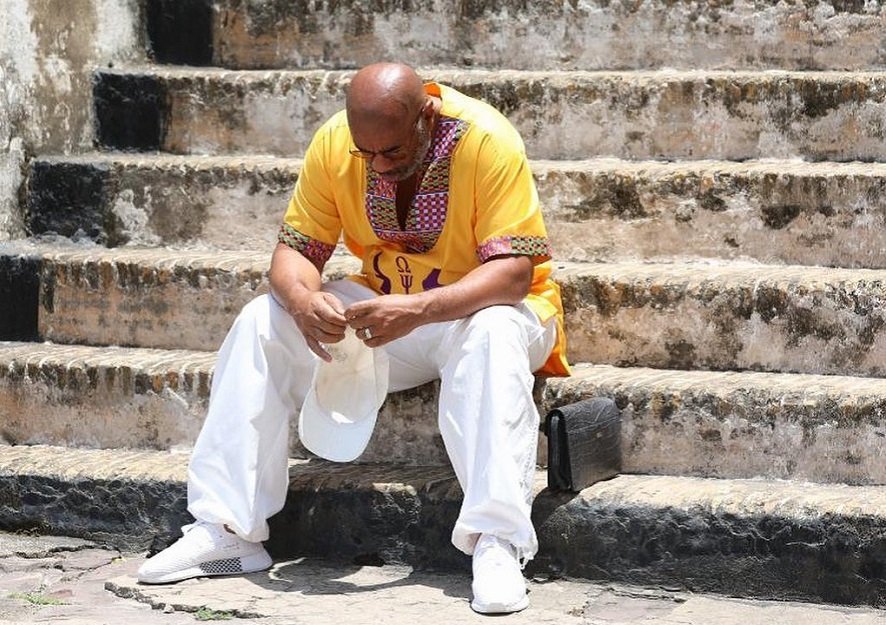 Quite recently, celebrated American comedian and TV show host, Steve Harvey visited the Cape Coast Castle as part of the Year of Return initiative organised by the Ministry of Tourism. His tour of the castle took him through the dungeons, giving him a close up encounter with history, his as well as the millions of black people all over the world. The experience shook him, stirring up a kaleidoscope of emotions.

He later penned down these words in an Instagram post: “This was real pain I felt going back to Ghana’s slave castles…I could feel my ancestors on me…powerful beyond words that I can explain. I encourage as many of you to for your ancestors. Their strength is in each of us and we must honor their ultimate sacrifice in all that we do”.

Ghana’s slave castles and forts are more than simply tourist sites; they are historical markers, silent narrators of a chequered and sanguinary past. Lasting more than three hundred years and spanning three continents, the transatlantic slave trade wreaked untold damage on the lives and psyche of the black people. At the centre of this unholy trade were the forts and castles where the slaves were held before being marched off to the coast to begin their one way trip to Europe and the Americas; to spend the rest of their lives in perpetual servitude.

The horrors endured by those unlucky enough to be captured as slaves are recounted in countless history books. The effects of this trade were monumental; with its consequences being felt even today. The dispersion of the black people remains one of the long-lasting effects of the trade in human lives. They were flung to diverse parts of the world, especially to the Americas. A great number of them were sent to the United States of America. That there are more than thirty million black people (excluding immigrants) in the US is testament to its scale.

Descendants of the people who made America rich through their blood and toil, they still experience severe racism and discrimination even within a country they have a right to call their own. Along with other Africans outside Africa, they are regarded as the African Diaspora.

To celebrate the end of slavery and to acknowledge the strength of those who endured the brutality of the slave trade, the government of Ghana declared 2019 as the Year of Return(YoR); inviting Africans in the Diaspora to visit their roots in Ghana.

Four hundred years after the first slave ship landed in Virginia, the descendants of these slaves set foot inside the dungeons where their forebears were held.

The YoR has been a resounding success with the visits of black celebrities such as Anthony Anderson, Jidenna, and Boris Kodjoe.

For Harvey, it’s more than just a tour to a castle or a visit to one’s hometown; it’s the vicarious remembrance of the strength of the black race and the revulsion at the atrocities meted out to his people. He went on to say, ‘How dare you create such an evil scheme; to strip people of who they are? To take us to a land far away where we were even hated more. And then we went ahead to build a whole nation. We built America.’ His words re-echo that which many thinkers have posed over the centuries.

What manner of evil, what kind of greed, could instigate the systematic deconstruction of an entire race? But it is not all doom and gloom for the Black race, Steve Harvey noted. He reiterated the oneness of the black people all over the world as well as the need for collaboration among Africans. To him, irrespective of the country whose citizenship they hold, Africans all over the world are one. “We are all the same. You are mine and I am yours. I am black like you’, he said. Slavery might have officially ended long ago but its ripple effects still manifest themselves in systemic racism and other micro-aggressions against black people across the world, especially in the US.

It is imperative therefore, for Africans to rediscover the strength and unity of their race to honor the sacrifices of their ancestors. Whilst Steve Harvey is not the first African-American to have been shaken by the aura of the slave dungeons of Ghana, and will surely not be the last, and whilst his message of unity and cooperation among black people is just one in a long line of voices, his moving experience at the slave castles in Ghana serves as a poignant reminder of a very dark time in human history.