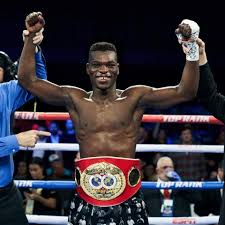 Richard Oblitey Commey has great hope in securing the world boxing title for the second time. According to the Ghanaian boxer it is possible for him to to emerge victorious for a second time.

In December 2019, Richard Commey lost his International Boxing Federation lightweight title to Teofimo during the second round of the fight. Speaking during a press conference on Thursday, February 11, 2021, “I thought the referee should have given me a chance to prove myself more but things happen for a reason and it’s past now, all I have got now is to focus and win this fight and become the two-time world champion.”

Commey is confident that he will beat his next competitor, Jackson Marinez, and therefore, secure a two-time world title holder. Besides, the Ghanaian boxer, revealed that he is aiming at redeeming his image in Saturday’s competition. “It’s time for redemption. There’s really nothing for me to prove in this lightweight division but it’s all about me really want to be a two-time world champion. Once I win this fight, there will be a lot of doors opened for me because the lightweight division is packed now.”

Evangelist Owurayere Nanapanin Arhinv requests ladies to allow their partners to be tough on them.